I spent most of last week in Oregon. My semi-annual working nomad routine entails a mix of heavy exploration and random wifi claim-jumping, so as not to veer too far off schedule when it comes to paying the bills.

There aren’t many cities where a bookstore is routinely listed among the primary tourist attractions, but Portland is an exception. The thriving downtown is home to Powell’s City of Books, and I made my pilgrimage on a rainy Sunday evening.

Powell’s is technically a regional chain, with several outlets scattered around the metro, but its City of Books, occupying an entire downtown block, is the main attraction. If you’re an avid reader and book enthusiast, wandering through this store is akin to a devout Catholic visiting the Sistine Chapel.

Nine separate color-coded rooms, scattered across multiple levels and connected by staircases and meandering corridors, make up the City of Books. Author visits and readings happen almost daily, and the store would seem to never have a slow period. Even on a Sunday night, the City of Books was buzzing with activity. Hundreds of patrons were scattered throughout the floors, and a public address system routinely alerted the dozens of staff members to a specific request or need somewhere in the building.

All that space allows for subject areas that are rich in depth of inventory. I was too late for their guided tour (yes, Powell’s actually has guided tours), but aimlessly wandering the stacks for an hour or two, in just a few of the rooms, made it clear that my short visit would barely scratch the surface.

The graphic design section alone (including a typography subsection), which in most bookstores would be relegated to a few shelves and a few dozen books at best, stretches an entire row length; floor to unreachable shelves and thousands of volumes.

At Powell’s, the distinction between new and used books is merely a matter of price and reference. Rather than socking the used books away in a room of their own, the carefully curated collections share the same shelf space. Books are not only  carried out the door by the armload, they’re carried in as well. The store buys around 3,000 used books each and every day.

Overall, the Powell’s flagship has something in the neighborhood of a million books on the shelves at any given time. Current bestsellers get their due, but are hardly the star attraction. If there's a book you'd like, fiction, non-fiction, on most any subject, the City of Books probably has it on the shelf. Hand-written staff recommendations are everywhere.

The glass-enclosed Rare Book room on the third floor has some 9,000 first editions and other out-of-print wonders, including a book published in Italy in the year 1480, and a two-volume set from 1814, an early narrative of the Lewis and Clark Expedition, carrying a price tag of $350,000. 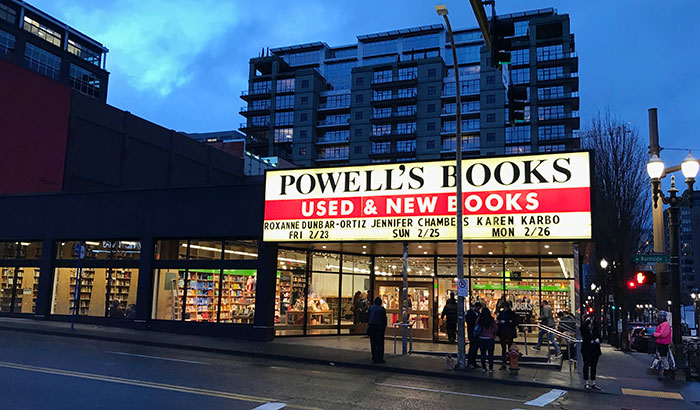 The entrance to Powell’s on Burnside Avenue brings to mind the glaring storefronts of the 1970’s, and first time visitors might expect a shop simply jammed with tattered paperbacks. But inside, Powell’s combines its massive inventory with library-like precision; clean, refined shelving and well-managed traffic flow.

Bookstores, like so many other purveyors of media, are something we tend to worry about. Justifiably. With Amazon bringing books and most every other kind of material good to our doorstep, keeping the lights on at small independent bookstores is more difficult than ever.

On the other side of scale, large chains such as Barnes and Noble are pushed to the brink as well. We’ve noticed that the local B&N in Maple Grove now devotes an alarming amount of floorspace to kids toys and games, and their bargain section of mostly coffee-table books has always occupied more floor space than seems justified (at least to those readers who view books as more than decoration). Combined with some recent cutthroat corporate management approaches, the Barnes and Noble market position is hardly stable.

Even so, there’s a permanent place for great bookstores, and reason for optimism over the long haul. We expect to see the best of them – like Powell’s in Oregon or Magers & Quinn here in Minneapolis – churning the book trade alongside public libraries for as long as good people might roam.