Early American publishers brought the message of independence to the masses

Already well-established, the early American press would take the actions of the 2nd Continental Congress directly to the people.

See the Journal of the American Revolution's 2013 post on the publishing arc of the Declaration, by Todd Andrlik. 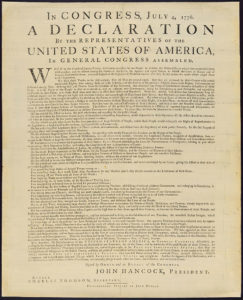 John Dunlap was a Philadelphia printer and bookseller  who landed the lucrative printing contract of the Continental Congress.

The Dunlap broadside was set to type and a couple hundred copies printed the night of July 4, 1776. These broadsides would be distributed to printers and publishers throughout the colonies in the following weeks.

A large sheet of paper printed on one side only. Historically, broadsides were used as posters, announcing events or proclamations, commentary in the form of ballads, or simply advertisements. - Wikipedia

While many of the early dispatches were singular broadsides, newspapers began printing the Declaration within their own pages, starting with the Pennsylvania Evening Post on July 6.

Due to the shipping gap, it was mid-August before the English in London were able to see the Declaration. By then, the active press of the now United States of America had published the document to every corner of the thirteen states. 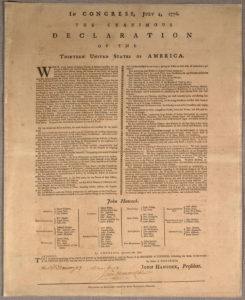 While not in the first crop of printings directly after independence, the Goddard Broadside of the Declaration stands out for several reasons.

Commissioned by the Continental Congress in early 1777, it was the first official printing that listed the signatories.

Also the commissioned printer was Mary Katherine Goddard, a Baltimore post master and publisher. Throughout American history, we find examples of women taking the lead role as publishers, even in eras where such bold business behavior from women was seen by many as improper.

Enemy of the people?

The Capital Gazette, descendant of a colonial newspaper, was among the first to print Declaration in 1776. 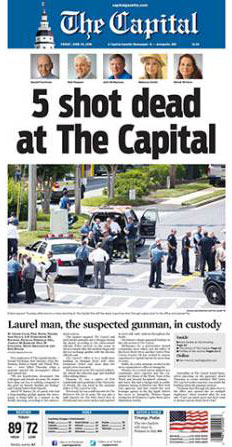 Last week, the massacre at The Capital Gazette joined preceding acts in our mass shooting epidemic. At the hands of a lunatic who'd been harassing the staff for years, the Annapolis newspaper paid a heavy price for doing the work of a free press and the constitution it protects.

Newspapers, from metro dailies to small-town weeklies, are long familiar with threats. Most anyone ever connected with a newspaper office can tell of a story (or two, or ten) involving some disgruntled reader who menaced reporters and office staff with alarming ultimatums.

Those threats have grown substantively more perilous recently, as the President of the United States, his administration and much of his political party lead an assault on the base integrity of the American press.

While the Gazette attack may not have been politically motivated, there's little doubt that those who oppose the idea of independent, honest news coverage are now operating on a hair trigger. The darkest elements in our society have rarely been more emboldened. To see them also validated indicates problems more disturbing than a single crime scene.

It was an odd experience for many of us, this past week, to come across head-scratching exchanges on social media. Even some of supposedly "rational" people in threads were suggesting that the Gazette might have been partially at fault. And still further on the Right, the President's grassroots were clearly not troubled at all with the idea of someone shooting up a newspaper.

The President has labeled professional media as "enemies of the people." In public speeches, he encourages his jeering audiences to scold the very press corps that relay his message to the masses.

While we'll admit that the 24-hour cable news networks are often worthy of scorn, for their endless punditry and sensationalism, Trump's vitriol extends far beyond the pale. The Washington Post, New York Times, and hundreds of other reputable outlets of news are too proven, over both time and professionalism, to deserve these brazen and groundless assaults.

Still, you'd best not underestimate people who work in media. The Capital Gazette churned out another paper that same night, after five of their own were murdered. It's a daily newspaper. They are there, bringing the effort every day and every night.

The Gazette is a direct descendant of The Maryland Gazette, which has been putting ink to paper since 1727.

During the colonial era, the fledgling newspaper gave voice to a variety of positions both loyal and rebellious to the British crown. Under second publisher Jonas Green, and subsequently his spouse Anna Catherine Hoof Green, the paper delivered news of the coming revolution with independence that brushed hard against the royal governor in Annapolis.

Front page of the Maryland Gazette, 1773 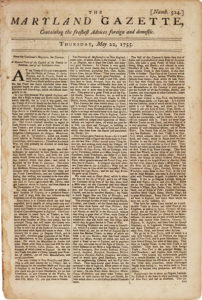 So, it's hardly surpising that in July of 1776, as the document that had been approved by the Continental Congress made its way across the land, The Maryland Gazette, along with a handful of other colonial newspapers, published our Declaration of Independence, for its readers to own and share.

Enemy of the people?  We think not.

We send out an email once or twice a week, highlighting something cool in media and publishing; + insider details on the project.

While most of our content is published for all devices, there are also special features and tutorials that are designed for larger screens. Be sure to visit the site on your desktop computer when you get a chance.

How can we tell you're using a phone? It's a matter of applying conditional styles and content when the website is accessed on screens of small pixel width. You're seeing this message because your screen is less than 768 pixels wide.