We believe that for most desktop users, the best browser to be using right now is Mozilla Firefox. A new version of Firefox released last fall is noticeably snappy in speed, lightweight in feel and structure, and caters to improved user privacy. (TechCrunch posted about the new Firefox in November.)

Additionally, if you use Firefox, we strongly recommend grabbing the free Facebook Container extension, which isolates your Facebook activity from the rest of your web browsing. This denies Facebook the ability to track, store, and sell your overall web browsing data to third parties.

If you're willing to be experimental with your web browsers, another great option for privacy and automatic ad-blocking is Brave, which entered the space in 2015. There's an undeniable feeling of throwback freedom when running a browser that just renders pages, without any effort to follow and profile your every move.

Understandably, many web developers and designers will continue to primarily use Chrome, the current "winning" browser, for the foreseeable future. It's pretty natural to prefer looking at the same thing your clients are seeing. 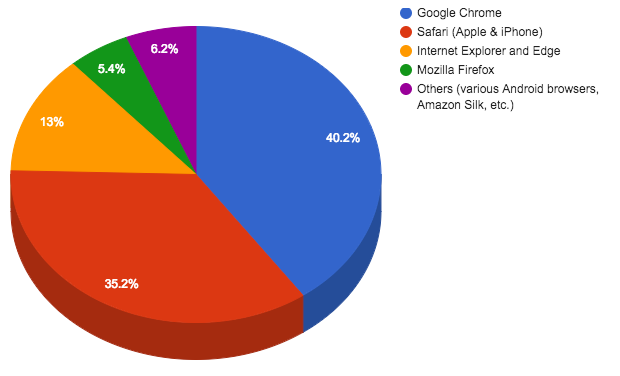 Browser Share Composite
This chart is a composite based on our own sampling of five different WordPress websites, all clients of Rivermile. These sites represent a cross-section, including a hyperlocal news site, a chamber of commerce site, a retail/commerce site, a non-profit site, and an educational institution.  The quarter sampled is from Oct 28, 2017 to Jan 28, 2018. We recognize that non-publishing entities (Fortune 500 companies, business firms, and so forth), would likely see a higher share for Microsoft browsers and a lower share for Safari and Apple consumer products.

Mosaic, the first generation graphical browser, was released in 1993. Mosaic was a project of the NCSA (National  Center for Supercomputing Applications) at the University of Illinois.

A year later, Microsoft brought out Internet Explorer, and so began the Browser Wars, during which the two predominant browsers battled not only for market share, but for the methods in which the web would be rendered.

By the turn of the century, deep pockets and release cycles of Microsoft first eroded and eventually turned the tables on Navigator. Netscape shifted their product into open source Mozilla.

Apple brought out Safari in 2003, a good and solid browser throughout its history, but it’s narrow line to Macintosh computer users meant Safari wouldn’t truly join the fray until the iPhone came along in 2007.

At this point Microsoft's Internet Explorer was still ascendant, despite an assortment of flaws and general discontent from web designers.

In 2004, IE would peak with over 90% of the overall browser market, trouncing of all its competitors.

But a storm was already brewing for Microsoft. Mozilla had shifted gears from Navigator and introduced Firefox 1.0. Just as Safari was getting its own feet under it, Firefox was exploding, first converting many in the technical and web development fields, then following to other power users in quick succession.

Firefox would whittle away at IE’s share for a long while. Still, Microsoft had its claws deep into business systems and many households, and wouldn't surrender its lead for years to come.

In 2008, Google released its own browser, Chrome. Similar to the explosion of Firefox, Chrome caught on quickly with professionals who worked the web every day. And whereas Firefox couldn’t quite crack the IE dominance, Google had the advantage of its quickly growing search-based ecosystem. The emergence of Chrome temporarily split the market quite evenly.

Safari, the default browser on iPhones as well as on the now formidable Macintosh computer line, would find tremendous gains after 2008 as well.

By the end of that year, Chrome had passed Internet Explorer, and hasn’t really looked back. IE core users, in particular Office users, would stabilize the position of IE over the following years, but Chrome gradually pulled away much of the Firefox crowd, as the latter browser struggled to attract new power users.

Depending on the source and the method, Chrome was in the neighborhood of 50% browser share as of December 2017.

Our own samplings (most clients track web metrics using Google Analytics), show Chrome with a clear plurality. Newer metrics are cloudier than earlier years, as you factor in so much mobile browsing, which includes a variety of Android phone or tablet browsers. In the under 3% segments, there quite a number of players.

Safari, IE / Microsoft Edge, and even Firefox remain in the thick of things, so we’re in a very competitive period for browsers at this moment.

Beyond even those familiar names, a new era of privacy, security, ad-blocking, and rich features means that "boutique" browsers such as Brave and Vivaldi are getting their due, albeit in very small shares.

As noted, browser share tracking is something of an imperfect sport. The methods for counting total share of a given browser can vary, particularly as you factor in mobile vs. desktop usage. Even the Wikipedia pages above feature different and sometimes conflicting data sources.